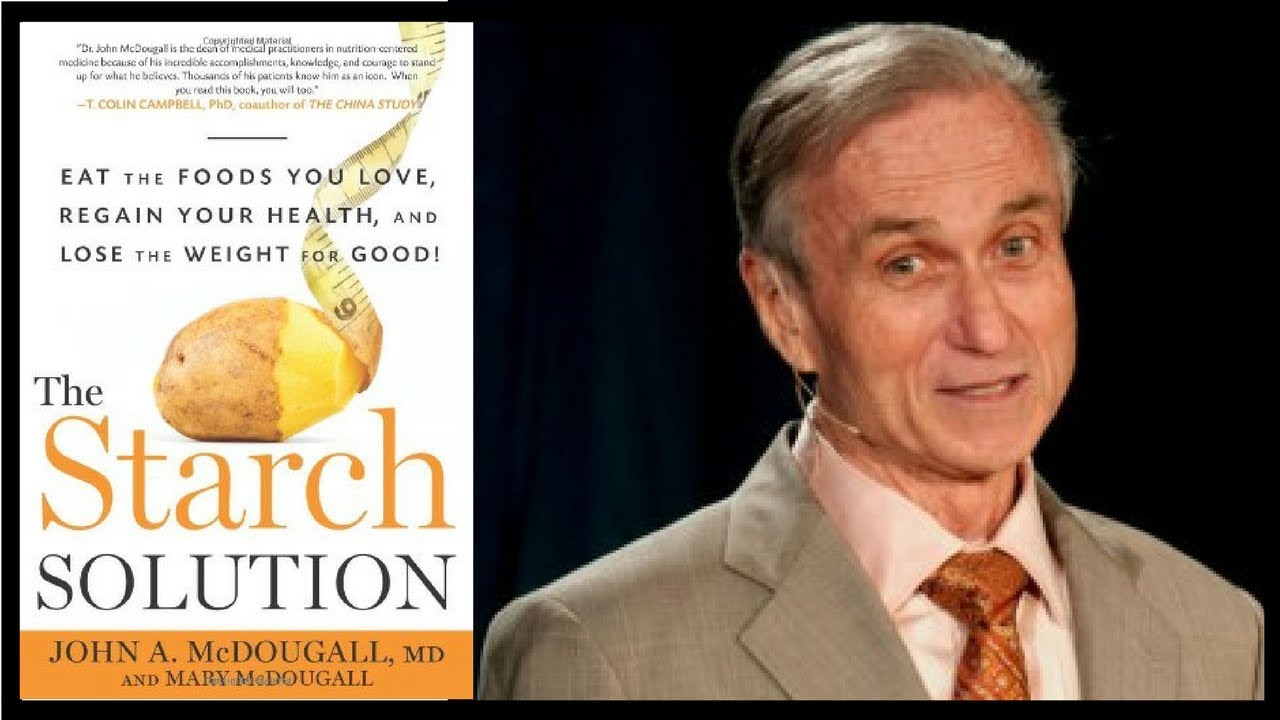 We couldn’t talk about carbohydrates, particularly starches, without mentioning Dr. John McDougall. Author of several books, amongst them “The Starch Solution”, he has always been a high starch low fat diet advocate, since working in Hawai as a family physician in the 70s.

He realised how first generation Asian immigrants that stick to their traditional diets rich in starchy foods like rice, sweet potato, and vegetables, stayed trim and healthy, but how second and third generations that adopted a standard American diet and moved away from their traditional vegetable and starchy foods, suffered the same chronic illnesses (heart disease, diabetes, high blood pressure, cancers etc…) as American people did.

It is widely thought that starches promote excess weight gain, but the fact is they don’t. Our body efficiently regulates the use of the carbohydrates we get from starch. Even if we consume them in excess, the body will burn them off as heat and energy rather than store much of them as fat (1). After eating, we break down complex carbohydrates in starchy foods into simple sugars. These sugars are absorbed into the bloodstream, where they are transported into the more than 10 trillion cells throughout the body to produce energy. If we eat more carbohydrates than we can use as our daily energy, and store as glycogen in our liver and muscle cells, we will next burn the reminder off, as body heat and through physical movement other than sports, such as getting dressed, walking to work, typing, going shopping, cooking dinner etc… (2,3,4)

Turning sugars into fats is a process called de novo lipogenesis. Although pigs and cows are very efficient at doing this, we humans, are very inefficient at this process, as the metabolic cost for this conversion is 30% of the calories consumed (5). The joint report on carbohydrates in human nutrition, between the World Health Organisation (WHO) and Food and Agriculture Organisation (FAO) of the United Nations also estates that de novo lipogenesis, the conversion of carbohydrates into fat, is a process that rarely occurs in human beings, and only in appreciable carbohydrate overfeeding (6). In most usual circumstances the accumulation of body fat via de novo lipogenesis is quantitatively very low.

The same report recommends a daily carbohydrate intake of 55-75% of the total calories. We are so well designed to metabolise carbohydrates that their digestion already starts in the mouth through an enzyme called amylase. Our approximately 10 trillion cells can use around 350-400g of glucose daily, and just our brain takes about 125g of it (20-25% of our total calorie needs). Our liver can store around 100g of glucose as glycogen, and our muscle cells, which preferred source of fuel is glucose, depending on the physical activity that one may practice, can store from 150 to 750g of glucose as glycogen.

Archaeological research shows that starches have been the primary food source throughout the world for the last 10,000 years, or even longer. Japan, China and in most Asian countries you will find a bowl of rice at every meal. The Incas in South America centred their diet in potatoes, and the Incan warriors switched to quinoa for strength prior to battle. The Mayans and Aztecs in Central America were known as “the people of the corn”. The ancient Egyptian starch of choice was wheat, and so it has been Europe’s. These starches, plus legumes, millet, sorghum, sweet potatoes, oats, buckwheat, rye and barley around the globe, have been at the centre of human nutrition throughout human history. According to the world renowned anthropologist from Dartmouth College, Nathaniel Dominy, PhD, “a majority of calories for most hunter-gatherer societies came from plant foods, not animal foods, thus humans might be more appropriately described as “starchivores”, like a cat is a carnivore or a horse a herbivore (7).